Here is some information about Turkish culture, for those who are planning to visit this country for the first time.

Turkish culture is unique because it has influenced and has been influenced by various civilizations for centuries. It is rich and diverse, its roots are in Middle East, Anatolia and Balkans, the cradle of many civilizations. 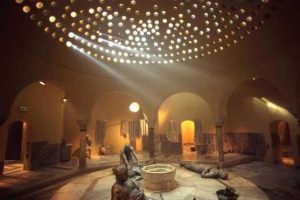 This culture combines elements of the Ottoman, European, Middle Eastern and Asian traditions. Ottoman Empire was a multiethnic one, and the republic which succeeded it is also a transcontinental country, European and Asian. Mustafa Kemal Ataturk transformed a religion-driven Ottoman Empire into a modern nation-state with a strong separation of state and religion.

Because of the different historical factors defining the Turkish identity, this culture combines efforts to be "modern" and Western, with a desire to maintain traditional, religious and historical values. It is one of few countries that contain every extreme of Eastern and Western culture together with the fusions between the two. Hospitality is important for Turks – they are famous for making one welcome. The majority of people you meet are friendly to foreigners. If you find yourself invited to a home, it's an opportunity that shouldn't be turned down. In the average Turkish home you will be treated as an honoured guest.

Before you start, if you also want to learn about how Turkey is home to various religions, you should read this article: Religious Diversity in Turkey

As a tourist you'll be offered tea by everyone who is trying to sell you something. It's not rude to refuse and it it's probably not a selling tactic, a lot of people are happy to talk to you about where you're from, what you do, how much you earn… If you're comfortable in a shop and like looking at the stuff, then have a tea. No one's going to expect you to spend money on a carpet because you got a free glass of tea. If they do then you're better off out of there anyway.

İts a is a delicacy which is a national institution, and tourists made it famous all over the world. It is a flavored sweetmeat prepared from starch and sugar, filled with dry fruits or nuts. It has a sticky texture and comes in cubes with powdered sugar on them. It usually accompanies tea or coffee.

Turkish tea can be drunk at any time of the day or night. If you visit a Turkish home, you will surely be offered a cup of tea because it is an integral part of their culture. The Turks always drink their black tea, glass after glass. It is served in small glasses.

The tea should be crystal clear and of a deep mahogany. Sugar cubes may be added but milk is a strict no. Very strong tea is poured into the glasses and it is then topped up by cutting it with water to make it as strong or light as you choose. You can have `acik cay` light tea or `koyu cay,` the stronger variety.

The tea is hot, so make sure you hold the glass by the rim or you may burn your fingers. The sight of cheerful `cayci` or tea-waiters carrying trays of tea is a sight that will greet you everywhere in Turkey.

Turkish tea is healthier than most others because no pesticides or chemical additives are used for its production, and it does not contain too much caffeine. As a tourist you'll be offered tea by everyone who is trying to sell you something. It's not rude to refuse and it's probably not a selling tactic, a lot of people are happy to talk to you about where you're from, what you do, how much you earn… If you're comfortable in a shop and like looking at the stuff, then have a tea. No one's going to expect you to spend money on a carpet because you got a free glass of  tea. If they do then you're better off out of there anyway.

In Turkey, it is an important tradition to offer cologne, usually the lemon one, during guest visits, on bus trips and in restaurants. During holiday family gatherings and on funeral days it has also become something like a ritual. If you have chance to visit a Turkish house, the first thing you will be offered is Cologne and candy. This is meant to refresh a guest who is just off a trip and to help eliminate the outdoor germs from hands. The candy that is offered with the Cologne, represents the Turkish belief that a sweetened mouth will open a sweet conversation.

Hand painted ceramics in Turkey are among the finest quality in the Mediterranean. The rich colors and designs prove great artistic talent. Many craftsmen and women in Turkey have dedicated themselves to a revival of the ancient traditions of Ottoman ceramics and have rediscovered the secrets of materials, glazing and colouring.

They produce great examples of the original designs, hand-painted in individual ateliers following the ancient tradition. The quality of the work is great, the design very free and imaginative, and used colours are bright and dramatic. Figural art is very rich in tiles, adorning both secular and religious monuments. The subjects include nobility, servants, hunters, trees, birds, lions, sirens and double-headed eagles.

This is among the most significant traditional procedures related to children in Anatolia, and it represents boy's passage from childhood into manhood. No parents ever wish to break away from this custom. People who have not been circumcised are usually humiliated and criticized.

Nowadays, it is more of a tradional than religious act, and it is usually celebrated during summer. During celebration, a boy is dressed and treated like a king and gets presents, usually a gold coin. It is one of the most important days and celebrations in the life of a male in Turkey.

This is is a celebration which ocurres the night before the wedding, usually at bride's home, and assembles mostly females, bride, her friends and female relatives.

Bride wears heavily embroidered dress or costume and her face is covered by red veil. The henna would be brought on a silver tray with two burning candles by the groom's relatives. The bride and her friends, carrying lit candles, approach the guests while coins are scattered over the bride's head as symbols of fertility.

Fruits, nuts and candies are given. Special songs are then sung in an attempt to make the bride cry, in belief that it brings good luck. Then, the bride sits on a cushion and her mother-in-law places a gold coin in the palm of her hand, which is a symbol of good luck and abundance. Finally, a woman known to have a happy marriage covers the palms and fingertips of the bride with henna. The bride's unmarried friends also tinge their hands with henna, believing this would help them to get married soon.

With our private tours you will have the opportunity to experience Turkish culture and traditions.

See Our Most Popular Turkey Tours