This is a perfect trip for everyone who can spend two weeks discovering beauties of Turkey...

You will visit main sights in Istanbul, Cappadocia and the Aegean region, but you will also have enough time to enjoy both cultural and natural richness of the beautiful Turquoise coast and to visit world know spiritual center – Mevlana Mausoleum. 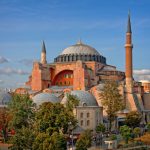 Transfer to airport for your return flight.

What should I do in Turkey for 2 weeks?

2 Week Turkey itinerary would cover all the main sites. There would be enough time for the combination of sightseeing and beach holiday. After you explore the fairy chimneys of Cappadocia, Ephesus, Pergamon and other most visited ancient cities and the main attractions in Istanbul, you can spend 3-4 days enjoying the Turquoise coast. Some of the nicest beaches in Turkey are in the Mediterranean region of Turkey.

Where should I go on the Turkish coast?

The nicest beaches in Turkey are between Bodrum peninsula and Antalya. Patara is Turkey’s longest and probably also the its most beautiful beach. Oludeniz (Fethiye) is also well known for its beaches, as well as Çeşme (Alaçatı), Marmaris, Alanya and Side. You should also try paragliding in Fethiye...

Where is the Turquoise Coast?

The Turkish Riviera, also known as the Turquoise Coast, is an area of southwest Turkey encompassing the provinces of Antalya and Muğla, Aydın, İzmir and Mersin. Some of the nicest beaches are in Çeşme (Alaçatı), Bodrum, Marmaris and around Antalya.

The Best Turkey Travel Guide for You!

Our Turkey travel guides are locals who have very good knowledge not only about the sights in the area, but also about the history of Christianity.

Have the best experience in Turkey with our expert local guides...

Reviews About Turkey Round Trip

Turkey at a Glance

Let's discover the mysteries of this magical country

FAQ About Our Turkey Tours

Most of our Turkey tours are private. We do not have definite departure dates for any of our tours, as we usually customize tours depending on your requests in the inquiries. Of course, if you have a group – we can always arrange your tour in Turkey.

What kind of transport you organise for multi-day tours in Turkey?

What kind of vehicles are used at your multi-day tours?

Depending on the size of your group, we can use Mercedes Vito or Mercedes Sprinter. All our vehicles are new (model 2016 or newer), comfortable and air-conditioned. You can see our vehicles

Do we have one guide during entire trip?

It depends on your itinerary… If you plan to fly between areas, in each one you will have a local guide; in that way you can get the best experience in each area and also avoid some extra costs (hotel accommodation and domestic flights for guide). If you plan to have a ground transportation, you will have a same guide during entire trip (in some small places it is not possible to find a local guide) and that is something that some of our guests prefer…

There is no price information on your website. Why?

Prices depend on the size of your group and services that are included. For example, some guests prefer to arrange accommodation on their own. The itineraries listed on our site are there just to give you idea about how much you can see during your trip. Depending on your specific ideas and thoughts, we customise your trip and send you price offer…

How much time you need to come up with a travel plan for us?

Once we receive an inquiry, we can send you itinerary option with price in 24 hours, as latest. Afterwards, depending on your ideas and suggestions we can change some details until we have the options that you want to book.

How can we pay for our trip?

You can pay via bank transfer, credit card or cash. We also accept PayPal / Payoneer deposit payments. You should pay 20% deposit when you decide to book; balance can be paid during your stay in Turkey.

Once you decide to book a tour with us, you should pay 20% deposit and it is refundable for 30 days from the date it is received. If you decide to cancel the trip afterwards, we will not be able to refund your deposit.

Will I need a visa?

Please visit www.evisa.gov.tr to get all information and obtain electronic visa if necessary.

What will the meals be like on my tour?

During your tour you will eat like a local. Local beer and wine are optional and at your own expense. We can arrange vegetarian, vegan and gluten-free meals if requested.

What is the baggage allowance on domestic flights in Turkey?

Normally it is 15 kg checked laggage and 8 kg in cabin, but for our guests we arrange eco flexible tickets so your baggage allowance would be 20 kg + 8 kg in cabin.

Do we need travel insurance in Turkey?