About Biblical Tour Turkey and Greece

Both countries have great importance in the history of Christianity, so during this trip you would visit some of the most important  Christian sights such as Chora Church in Istanbul, the Seven Churches of Revelation, Philippi, Corinth and other spots made famous by Paul in Athens and Thessaloniki region. 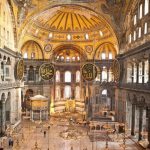 Direct ferry from Kusadasi to Patmos is not available, please contact us for information about the charter

In March 2019 I visited the Agape Church in Orange County, California, where I gave a short speech about our Biblical tours. I would like to thank our great host Vasile Petean for inviting me to the church, and pastor Crinisor Stefan who gave me chance to share informations about our tours with church members. This video can give you idea about our Turkey and Greece Biblical tours.

The Best Biblical Tour Guide for You!

Our Biblical tour guides are locals who have very good knowledge not only about the sights in the area, but also about the history of Christianity.

Have the best experience in Ephesus with our expert local guides...

Laodicea at a Glance

Travel back in time for a memorable #tbt.