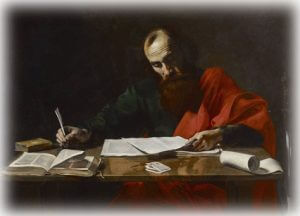 Saint Paul was born in the Roman city of Tarsus, on the eastern Mediterranean coast, now Turkey. The story about Paul's conversion to Christianity takes very important place in the history of this religion. He traveled a lot in Asia Minor, trying to convert population to Christianity.

We can nowadays understand how difficult it could be to travel in those times and how dangerous for him, and it makes his accomplishments for the religion even greater. He had made three missionary journeys before he was arrested in Jerusalem and taken to Rome where he was beheaded in 62 AD. The New Testament contains fourteen epistles written by Saint Paul during his missionary journeys.

Paul's first missionary journey happened in 47-49 AD. Paul traveled with Barnabas and John Mark from East to West along the Mediterranean coast, stopping in Seleucia, Antioch, Side and Attaleia (Antalya). They also visited Antioch in Pisidia (Yalvac nowdays) and Iconium (Konya), Perge and Cyprus. It is be Ieved that as a result of this journey many Jews in Pisidia accepted the word of God.

During the Second Journey Paul traveled much farther. After visiting some of the places from the first trip, he went to Troy and then crossed Dardanelles to go to Macedonia (northern Greece).

He traveled with Silas to Derbe and Lystra (near Konya) where a young Christian Timothy joined them. Luke the evangelist probably joined them in Alexandria Troas.

Whole there, the Lord told Paul in a vision to go to Macedonia to preach, so they went to Thessalonica. There, Paul spent three days speaking in the synagogue and managed to get support from some citizens, while others protested so they had to leave the city by night.

Then they went to Barrea where they were well accpeted by Jews, but again Jews from Thessalonica managed to turn people against the preachers. The same happend in Athens, city full of pagan philosophers.

Paul then journeyed to Corinth where he managed to convert the chief of the synagogue and his family. After spending a year and half preaching in Corinth, Paul visited Ephesus for short, then traveled back to Jerusalem and finally back to Antioch.

During the Third Journey Paul revisited some of the cities and went to Ancyra (Ankara), Smyrna (Izmir), Adramyttium (Edremit) and Ephesus.In Ephesus he found twelve followers of John the Baptist and baptized them n the name of Lord. He spent two years in this city and his preaching caused problems.

One of interesting stories is the one about the court case against Paul in the Great Theater.

One of interesting stories is the one about the court case against Paul in the Great Theater. The silversmiths who were selling statues of fertility goddess (Cybele/ Artemis/ Diana) to the pilgrims coming to visit the Temple of Artemis. The more people listened to Paul, the less they believed in Artemis, and it was affecting their job, so they brought charges against Paul. At the end he was released. Although he was not forced to leave the city, he understood it was the best thing to do and went to Assos, Chios, Samos, Trogyllium and Miletus, and from there to Cos, Rhodes, Patara and Syria. A prophet named Agabus told Paul's companions that Jews in Jerusalem would capture him, so they tried to pursuade him not to go there, but he answered that he was ready to die for Jesus...

During the Final Journey in 59-60 AD Paul was arrested in Jerusalem and sent to Rome for trial, but a storm prevented him from landing there...

In 59-60 AD, Paul was arrested in Jerusalem, charged with inciting to riot, and shipped off to Rome for trial. He changed ships at Myra (Demre) and headed for Cnidos, at the tip of the peninsula west of Marmaris, a harbor where ships often waited for favorable winds, but a storm prevented him from landing there.

See Some of Our Bible Tours